There isn’t much I can say on this, but I do have a theory that never became relevant, and, accordingly, was never confirmed or denied.

The scene where Keiichi goes to Angel Morte for the first time is a really weird situation. him and his dad just suddenly head over there under the pretence that his mom doesn’t have time to cook, and when they arrive, his dad disappears to the toilet for like half an hour.
Before that we have a scene of Mion wanting to get closer to Keiichi, but feeling like the boyish first impression she made makes it impossible for Keiichi to see her as a girl,… so I think there’s plenty of things pointing to this scene being a date that Mion organized with the help of Keiichis Father, with her using Shions persona as a way of getting a second chance at meeting Keiichi for the first time.

It’s good to be back in Hinamizawa.

After starting Umineko, I feel like I’ve been spoiled, because this episode didn’t resonate with me in the same way that Onikakushi did when I first read it. That could have a lot to do with the fact that I knew the scares were coming, even though Ryukishi did his best to mix things up. It could also be the fact that it feels like a precursor to Episode 3 of Umineko in that (Heavy EP3 spoilers) the culprit seems to look incredibly obvious, but then at the end something new is thrown at the reader that contradicts everything the reader’s been told up to that point. So while I did enjoy this episode a lot even though I had to read it by a vague deadline, some of the concepts did feel a little stale to me.

With that out of the way, time to discuss the ‘sharing of the soy sauce’.

Stemming off from what I remember of Onikakushi (which I’ve discovered I have yet to write a post about), I came up with the theory that Keiichi was hallucinating some things partway through. In the All-Star Cast Review of Onikakushi, Keiichi claimed that the murders were caused by both humans and a curse, but I think that may actually have some ground. It’s my personal belief that while there are people who were killing on the night of Watanagashi, the curse of Oyashiro-sama was slowly taking its toll on Keiichi himself in the form of severe paranoia. Whether or not Rena and Mion were going to cause him harm or not was still up to interpretation, but Keiichi’s murder justified his death in some way.

In Watanagashi, Mion definitely seems more suspicious now, although that doesn’t mean Rena is off the hook either. In fact, it differentiates itself too well from Onikakushi in that not once does Rena verbally attack Keiichi, but rather acts as a trusted ally. I think there could be two reasons for this:

One, both Rena and Mion are still in cahoots with one another, and Mion placed all the blame on herself to avoid giving Rena trouble. Rena pretended to be an ally, throwing him off with ‘evidence’ that would place the blame on Mion in order to hide what she had done. This is me invoking Chesterton’s third rule of writing detective stories, namely that if the criminal is in the foreground, he/she should be serving in some capacity other than ‘criminal’. Thus, I feel that it is very possible Rena is still the culprit even though she’s clearly ‘assisting’ Keiichi.

Two, neither Rena nor Mion were ever the culprit in the first place. In the All-Cast Review Session for Watanagashi, Mion suggests that the first four murders were too good for the fifth, which was incredibly messy. The Sonozaki family would have covered their tracks pretty quickly if they wanted to murder someone quietly, suggesting that the purpose of this story was to ensure that Mion definitely wasn’t the culprit. And maybe Rena really didn’t know anything, and the criminal is hidden from us until a later chapter. It kinda sounds like a cheap tactic to make us read more, though… ._.

And I haven’t even started talking about the anomaly that is Shion. Another tactic suggested by the gang is what Umineko calls ‘spinning the chessboard around’, which in this case means putting myself in Mion’s shoes to understand why she did the things she did. I think even Battler would have understood that Mion held feelings for Keiichi, but because of two major factors (Keiichi’s cluelessness and Shion’s own feelings for him), she was driven to throw herself in the metaphorical Onigafuchi of her mind and attacked the both of them in a slow, painful manner. If she were the culprit, what fueled her murderous rage was jealousy.

I also think that the throwaway tidbit about Mion and Shion switching places when they were young might be incredibly important here. We have little idea who could have called Keiichi when Shion disappeared, although via chessboard logic, it’s easy to suspect that Mion could have made those calls under the guise of Shion. And then comes the question of who stabbed Keiichi when Mion died. So here’s what I came up with: What if Shion was actually the one torturing Keiichi, and Mion was in the cell? You could say the one thing that differentiates them is their tattoo, but Rena refused her when she tried to show them, and she thanked her. Not only would this further back that Rena was in cahoots with Mion/Shion/whatever, but it would also be something of a Devil’s Proof (if I’m using my terminology correctly), because we never saw the tattoo on her back. One of them has to be Mion because Mion has the tattoo, but until we see who has the tattoo, it’s impossible to disprove that Mion is actually Shion in disguise, and vice versa. 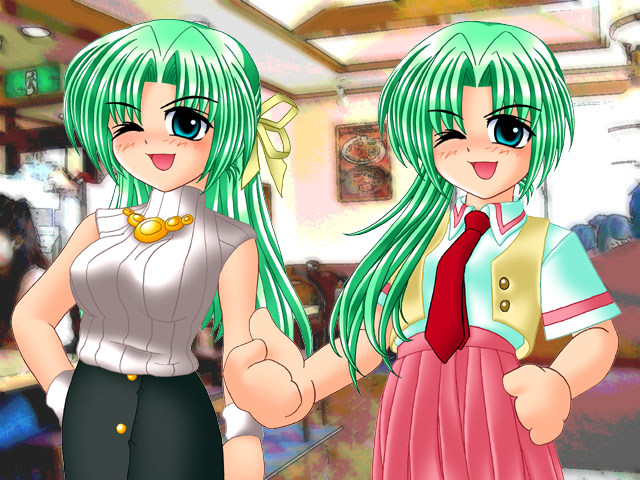 Anyway, I’m done rambling. I thoroughly enjoyed reading this chapter, although at this point I could care less about the lore of Hinamizawa. Seriously, how did Rokkenjima become a far more interesting place?

So we just finished the podcast, and I just realised that we forgot to talk about a really important scene; the scene where Keiichi is on the ladder and Mion flips her shit.

Can we talk about that?

So this first part is my reply before reading the topic, so I’m sorry if I repeat stuff.

So first of all, what do we have confirmed now: Not much, really. The only thing that wasn’t doubted is that Hinamizawa definitely has a dark history. As a corrollary, even though the Review Session doubted the Sonozaki family’s involvement, they do have access to further torture devices.

Now for some of the things that don’t make sense. In the Review they already went over how “Mion” could stab Keiichi even though she’s dead. However, that leaves both Keiichi’s eventual death, if that is how the end of the hospital scene was to be seen, and Takano’s reappearance even though she was supposed to already be dead. I only have an explanation for the latter. Basically, since she burned to death and was only identified through her teeth, I could reasonably assume that not all of the burned remains are actually Takano’s. The former though is way more confusing, especially because I’d assume Keiichi’s mother to reenter the room once Ooishi left.

Now the Review also asked why Keiichi is targeted in both chapters and said that it can’t be because of the storehouse since he never went there in the first chapter. Now, in this chapter it showed even more strongly that the village kind of acts as a whole and is way more close-knit than even other villages. At parts it felt similar to depictions of sects in fiction to me, even. So it could very well be that Keichii crossed a line of sorts in both chapters that basically caused the villagers to deem him “dangerous” or “sinful”. With that approach this line then could have been the storehouse in this chapter. For that matter, one thing that happened in both chapters is Keiichi invariably asking about the incidents before Watanagashi. Another thing I can’t really make heads or tails of yet is Mion’s remark of Satoko being “cursed”. One thing that’s important to note is that we can’t be sure if Mion is Mion and Shion is Shion for most scenes. Only those where both appear can we be sure that they either are indeed themselves or have swapped positions, however such a theoretical swap could not happen during such a scene where both appear. Oh, the existence of Shion and the influence of the Sonozakis explains how Mion knew that Keiichi ate with Ooishi in Onikakushi, since they ate at Angel Mort, as far as I remember.

Now some thoughts on my feelings towards the story in general. Music wise, it’s funny, I like more the sad and scary tracks, but the tracks that play during the SoL scenes are only meh to me. Feeling wise, though, I’m confused. I mean, from what I hear this is supposed to be psychological horror, yet I never felt fear, neither in Onikakushi nor in Watanagashi. I mean, what I do feel is a feeling of sickness or disgust whenever deaths or tortures are described in all their details, but actual fear, no. So, am I weird?

Also, I don’t know where to put this, but I wanna put this somewhere:

Stuff Watanagashi referenced (from what I felt):