Now it opens up a whole new theory that might open up for some scary stuff like the question “If it isn’t Hanyuu following people… then what or who is following people and causing that extra footstep?” Paranoia?

Alternatively, Satoshi’s comatose spirit following these guys and the paranoid were right? Maybe one of the characters revealed in Kaku/Outbreak?

umineko only has those knox rules because beatrice wanted it to be, higurashi though has no obligation nor is the creator of it interested in that type of stuff.

like van dine has rules that are used to determine if the story can be considered mystery, but it doesnt apply or works in umineko.

So, does anybody have an info or theories on the timeline of the arcs? I’m wondering whether they’re meant to be general representations of some of the most commonly occuring scenarios, random ones throughout Rika’s lifespan or directly in succession of one another chronogically for her? We know that the latter is the case for Tsumihoroboshi, Minagoroshi and Matsuribayashi of course so it’s easy to assume the same goes for the others, but especially for the question arcs, it’d be interesting to consider whether that’s not the case. Though Rika kills herself in Meakashi seemingly directly in response to the events of Watanagashi, she later talks of the events of those arcs as though they’re fairly common occurences. It’s really interesting to me to think about whether there really were main routes the events tended to fall into or if they could differ quite drastically from world to world and whether there were a large number of possibilities for what happened.

“General representations of some of the most commonly occurring scenarios” would be my best guess. They’re definitely not chronological (or at least, Himatsubushi definitely didn’t occur “recently,” because Minagoroshi is the first time Rika has seen Akasaka in decades).

I second Isae, too, they are probably not chronological, though there’s not really any evidence that proves it or its opposite, anyways. I suppose what you’re saying about events differing form world to world is somewhat implied in the series too, and yes, I also suppose that some worlds not shown to us may have had drastic differences, yes. But the worlds that give the clues as to what’s really going on and have some of the characters that are related closely to the plot or to certain events certainly are the most important ones to show, which is what has been shown to us. There could be some side stories or something, describing a world with a completely new chain of events, though I guess except for maybe expanding some more some of the characters who haven’t been the protagonist for any of the arcs, they wouldn’t offer much clues to what’s really going on.

Does anyone know where to find all the Alchemist CGs for Higurashi? The Umineko ones are very easy to find, but the Higurashi ones are a bit difficult to scout out.

I found this site a long time ago that lets you manually patch the backgrounds/character sprites from the originals to the PS2 ones.

I have a question about Saikoroshi-hen: presuming it’s set some time shortly after Matsuribayashi, why is Hanyuu only present in her non-human form?

In Saikoroshi, Rika’s mother is the reincarnation of Oyashiro rather than Rika herself. Because of this, Hanyuu is able to befriend Rika’s mom and live a fulfilling life. Since Rika’s mom doesn’t die the horrible deaths like Rika does in most arcs, Hanyuu is able to “move on” from her physical form (as well as the mortal plane). Rika’s life with Hanyuu is short lived, which is why Hanyuu takes the two of them to a new fragment every time Rika dies. 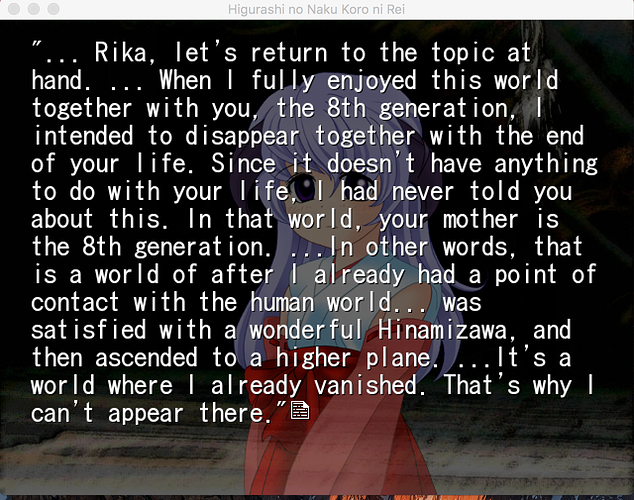 I’ve thought about this, but I haven’t come to an answer.

Someone should ask Ryukishi that someday.