This is totally not fitting of Rokkenjima, I know I know, but this is in a way nonetheless a means to learn to know about each other through preferences.

So just name one or two favourite and dont think about it too much, we can later kung fu fight to the death over it.

My two favorite senshi have to be Saturn (Hotaru Tomoe) and Venus (Minako Aino)! 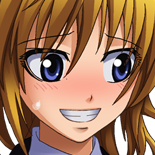 I mean, if possible, we can also totally explain why a certain senshi (so not used to that word

) is our favorite one.

For me I like Makoto (Jupiter) a lot, basically because she nails that whole being cool without it being overly in your face, from what I remember. Granted, it’s been like what, 12 years or so since I watched Sailor Moon, so my memories are most likely very very clouded.

Well I like Tsukino Usagi a lot because her flaws are essentially things that society in general tend to look down on, but when it really comes to it shes actually more mature than most if not all of the rest of the cast (or at least has a character development going that way) and she’s both a fun person and a truly kind soul in a way that few heroines (or heroes) tend to truly be. If the question was which one I’d want to have as a friend, the answer would be even more obviously leading to her. She’s not on the level of Neptune, of course, but…

I like Hino Rei because in large part I’ll admit I like her tsundereness toward Usagi and the general contrast the two provide with each other. Tho beyond that, her general character concept as a sort of… mystique Miko and the isolation it bought her and her duality in a sense over being a very modern girl and yet very traditionalist at the same time makes her feel to me like a much more complete character than I think any of the others, which comparatively feels less 3 dimentional to me.

I was always a big Sailor Saturn fan growing up. The motif of “Death and Rebirth” with recreation through destruction was really fascinating, plus she shows up so rarely each time she makes an appearance it feels important. I used to get my hair cut like Hotaru’s for a few years when I was in middle school. She suffers from a severe lack of presence though. Why she was MIA for as much of the Stars as she was when the other Outer soldiers at least got some screen time…well…

Sailor Moon (Usagi) …She always is and will be my true favorite, but there are more reasons than can be credited to any particular characteristic she has in any incarnation of Sailor Moon. Usagi is an interesting character, particularly if you consider her across the various medium Sailor Moon has been portrayed in, and she has many great moments, but because she works as the central point of all things in the series she is more than herself. She is who the outer senshi believe she is and who they show affection for even when she falls short, she is the one who draws the darkness to Earth and the one who banishes it. And yet, if you return to S1 of the original anime, you have baseline Usagi for better or worse! And really, one of the themes of the show is struggle against the building tide of her being more than herself – like when she chooses not to be reborn at the end of the Stars in the manga. And as the face of the series that has been important to me than any other single piece of media I just have spent so much time with her that my affection for her is not constrained by demonstrable action she takes.

Best Sailor Moon is Super Sailor Moon from S. She has the best transformation and attack~ Plus a lot of the art for that as the stripes as the northern lights/rainbow motif which kind of went away for SuperS Super Sailor moon.

Obviously, you can tell by my profile pic that I’m a huge fan of Sailor Moon, with Usagi herself probably being my favorite. I really love how she can be a complete and uttered ditzy person at times, while also being a great hero. You can tell over time that she transforms from being the self centered Usagi to being the selfless Sailor Moon, and I really love that about her. As others have said, her flaws allow her to have a lot of character development. Initially she’s an immature crybaby and rather unlikeable, but over the series we get to watch her become a leader who can make good decisions not only for herself, but also for others. Overtime she stops being so selfish, and truly embodies an empathetic, kind, and caring character. She’s an important reminder to me that even normal people can transform into something great if they put in enough hard work or you know, meet a magical, talking cat. I looked up to her a lot when I was younger, and I think a part of me still does.

But I also like Ami (mercury) a lot too. As a shy bookworm, I identified a lot with her when I was younger. Usagi allowed her to become more extraverted and friendly, but she never lost her intelligence. Both she and Usagi inspired me to become more outgoing as I grew up, and I’d like to think I’ve made a lot of friends that way! And she still reminds me of the fact that extraversion and intelligence are not mutually exclusive.

Gosh, are some of you really Sailor Moon fans? Why had nobody told me anything before? I’ve been a Sailor Moon fan for over 10 years now and I used to be quite active in the fandom a while back. I definitely do consider myself a big Sailor Moon fan and I am pretty knowledgeable about it, too, having watched the 90’s anime, read the manga, read the Sailor V manga, watched the live action, some of the earlier musicals… and the not-so-well-done Crystal too, of course, though I do blame the manga for that, as I don’t like it very much either. But enough about that, now about my favourite Senshi…

My three favourites are Uranus, Neptune and Venus. It is highly likely that either Uranus or Neptune is my ultimate favourite, though I can’t decide between the two of them for now. Anyhow, I like Uranus a lot for her sophisticated, aristocratic and flirtatious personality and for being a very strong and independent young woman. I also like her for being an anti-hero too, and having a more complex attitude towards their duty together with Neptune in the beginning. I just like it a lot how she carries herself and her interactions with the other characters, how she is mature and even cold at times, yet is not always right about everything and even though mature, is still growing.

As for Neptune, I like her so very much for the aristocratic young woman she is and how she is such a beautifully flawed character. Indeed, many wouldn’t find her flawed and say she’s the perfect young woman but I think it is the total opposite. Michiru is cunning, cold and sort of an anti-hero, yet all of that is integrated with her intelligent, elegant and artistic self, making such a complex character. I also like her a lot for her association with the arts, that I’m very into myself. She truly has that maturity yet doesn’t put others down with it, always being clever and deftly making the best of a situation. She truly has that charm of the elite.

And Venus is my favourite from when I was younger, well not really my favourite from the first time I watched Sailor Moon, but she became a favourite later on when I started getting into the franchise again. I really like how flamboyant and extravagant she is, sly, even, yet has a serious side. I like her storylines, portraying her as a complex character and her attitude in general is pretty cool.

Ha ha, sorry I made this so long, and I’d rather continue, but as you can see, I am passionate about Sailor Moon and very much into its characters.

I will admit - I know nothing about Sailor Moon.

But Sailor Uranus is beautiful.

Honorable mention: Rei, because I seem to generally have a thing for assertive characters.

And of course, despite thinking she can be a bit of a jerk sometimes, I have a crush on Haruka. I’m pretty sure most people do though. 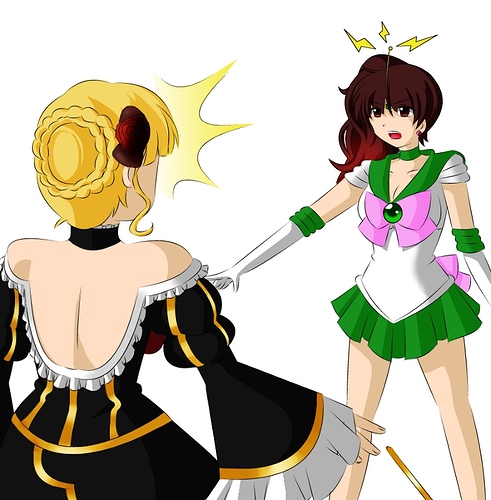 But to be serious, although I have only watched first set of the Sailor Moon series my favorite would probably be Rei. She seems like such a strong person, Both physically and emotionally!

though I do blame the manga for that, as I don’t like it very much either.

Someone said it? A Sailor Moon fan actually said it?

I don’t want to derail the thread, but I agree, a number of the failings of Crystal stem back to failings of the manga . I rarely run into fans that do more than just gush about how much better the manga was, when I can’t help but view the original manga as an interesting amalgamation Takeuchi-sensei’s of unfinished ideas best considered hand in hand with the 90s animation.

Oh definitely, I don’t like the manga much and I do agree that there are many fans that for some reason think it’s better. I don’t want to derail the thread here too, but I frankly don’t understand the logic behind that. I mean the manga has some interesting concepts, albeit most of them remain unfinished and the best thing done with them was to be considered for the 90’s anime. Also, many fans find the manga to have such a mature air, while I think it’s the total opposite. For example, I find Usagi so immature in the manga and she mostly has stubborn thoughts of her own and solutions to certain situations that the other characters either disagree with initially then decide they must agree with or blindly agree with. I mean, they follow Usagi’s every whim and she is so unreasonably adored and the Senshi even put her life, wishes and happiness before their own, while in all other versions of Sailor Moon, both their life and Usagi’s have their own, separate importance to them. I actually really dislike Usagi’s manga counterpart, but I suppose I’ll be nice and stop here. The only good thing the manga has for me is the wonderful art, actually. But I very much agree with you that it is not Crystal that’s the not-well-done adaptation, those who say that should take a look at the source material behind it first.

I really can’t pick one anymore ever since I found this series. Not gonna lie . But if I had to go with someone I could hang out with and get something out of it, it’s either gonna be Mercury or Neptune. It’s just that I like the color blue.