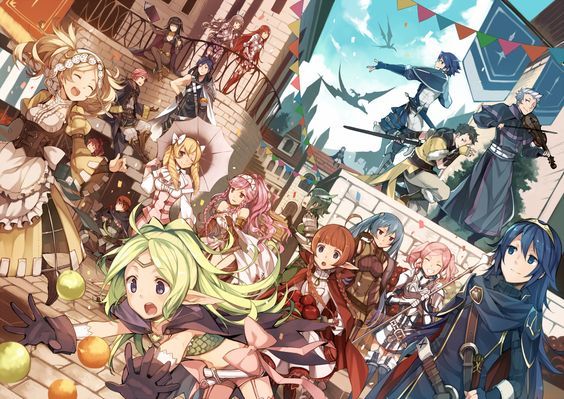 Why wasn’t this thread made yet?!

Come here to discuss Nintendo’s famous tactical RPG series, Fire Emblem! Whether it might be the shiny Cipher cards you’ve collected, the main line games you’re currently playing, tactic strategies, or trying not to obtain a gambling addiction, everything about FE is allowed!

Why wasn’t this thread made yet?!

You know how a big part of the userbase coincides with Kaza’s userbase and that Kaza was there first? Well, it also had a FE topic, that’s probably the main reason.

Anyway, Fire Emblem is one of my fandoms and I have played every game that was released in the west (so 7 through 14 minus 12) and read/watched LPs of 4, 6 and 12, so I also know the plot of these. In terms of story, Path of Radiance and Radiant Dawn are my favorite if you look at them as one story instead of two. The GBA FEs are my favorite in terms of animation, although RDs mastery skills (and criticals) have some nice animations as well. Also, PoR and RD still had crazy spell animations that were sadly missing in 11 through 14 (like dropping a sun on your opponent, looking at you, Sanaki). In terms of gameplay, probably 7, and to a lesser extend 8, as those I feel I’m most willing to play again for the fun of it. I’m honestly not playing Heroes because eww mobile (but my mom is), but I’m hyped for the other three FEs announced.

Praise to the weapon triangle and the RNG.
I’ve played most FEs. Pretty much everything from 4 and upwards, with the exception of 12.
Even Heroes. It’s simplified, but it has its own interesting challenges.
My favourite gameplay-wise is probably 7. I think the fact it was the first I played makes me biased though.
As for which is my favourite as a whole, FE4. Really hoping it’s next on their list of remakes.

Well, as the resident filthy casual I started Fire Emblem with Awakening and loved it to pieces. Though my love quickly turned me into a fan, I was unable to purchase any older FE games at the time, and mostly stuck to LP’s until Fates came out.
Fates…was interesting. At first I liked it a lot, but to this day I still have not completed it. I made the horrible mistake of going through the game like I was playing FSN and everything infuriated me about Birthright from its really easy (yet kinda bullshit gameplay), to the absolute lack of care the writers gave about the story and characters. I literally put the game down cause I got too bored.

Maybe I’ll start again with one of my Conquest files that on Ch.6, but not right now.

I highly suggest Conquest. It has far better Map Design and difficulty than Birthright. Birthright is almost insulting in how easy it is. Also, while a very unpopular opinion, I think the story of Conquest is better. Had much more ambition than Birthright, and while I understand people’s frustrations with it, I don’t mind the problems they had with it.

I think the story of Conquest is better. Had much more ambition than Birthright, and while I understand people’s frustrations with it

I also had this opinion, but I feel like Conquest just shits upon its ambition to the point where I wonder why the writers even bothered.

Edit: My boredom with Fates has gotten to point where I would rather much prefer a remake of Awakening with Valentia’s more polished version of the current engine. The story wouldn’t even have to change as people are already hacking Fates and adding in different dialogue and scenes. I could make my own story.

How do you guys think that Shadows of Valentia is shaping up?

It’s looking great. I heard Gaiden was the black sheep with some unique ideas, and seeing them in the remake makes me appreciate them as they look both very different and very fun.

I guess there’s the fact I didn’t really like the Shadow Dragon remake much. I hope this one has aged better than that. (it all comes down to how much they polish it up, I guess)

From what I’ve seen through LPs from New Mystery of the Emblem (FE 12, the remake of the second book of FE 3 (first book is FE 1)), that one was leagues better than Shadow Dragon, one of the main reasons for that was because they remembered for that one that people like support conversations or something equivalent to that. As long as they do something similar for the Gaiden remake, I’m optimistic.

Also, wow, I’m really interested how archers are going to work in Echoes. Them being able to counter might actually put them away from the stigma of “Eww, archers” many FE fans have for several games.

Them being able to counter might actually put them away from the stigma of “Eww, archers” many FE fans have for several games.

Archers were great in Fates though. Takumi was a literal tank with legs and Setsuna was always useful.

As long as they do something similar for the Gaiden remake, I’m optimistic.

If you look at the imgur link, SoV is shaping up to have tons of exciting features. It seems like fatigue is coming back.

I know that archers were great in Fates, that’s why I said several games, not all games. You forgot Mozu, who I like to describe as “Takumi without his special bow”, although I guess that’s through reclassing.

Fatigue was in FE 5 if I remember correctly, right? I guess it makes a lot of sense in a game with a traversable world map. But that’s amazing then, I’m looking forward to it.

We’ve got a new trailer!


I’m liking what I see so far, but those maps and Catria’s new design look awful.
Also, now that skills are in the game, what was the point of reemerging strength and magic?
Blackrune March 30, 2017, 4:36am #15

Also, now that skills are in the game,

Uhh, as someone who doesn’t speak Japanese and could only guesstimate from the images thanks to that, what part of that trailer tells you that skills are in the game?

what part of that trailer tells you that skills are in the game?

the absolute lack of care the writers gave about the story and characters.

Yeah…I am still sitting with Fates unfinished. It and heroes are still the only Fire Emblem games I’ve played. I love Heroes, and while I consider my time with Fates (specifically Birthright) positive the story is such garbage it is still unfinished.

I might try Conquest but at this point I wonder if I am better off cycling back to Awakening or checking out Echoes when it comes out - though with the current mix of games I am probably better off pondering this question later. Persona 5 will be my all next week.

the story is such garbage it is still unfinished.

Mfw the scene where Lilith dies

or checking out Echoes when it comes out

If it helps, the previews so far look very promising. Maybe the story will even be PoR tier.

The live-reaction that was edited into the following video sums it up pretty well. Also you might want to use spoilers there, like I just did. As the video suggests, there are spoilers, although not in the thumbnail, so I can still post it the normal way.