This Story is Not Very Good - Impromptu Roleplay

This will not be very good.

Sign ups are incorporated into the story as seen below.

"Allow me to tell you the story of quite the interesting tale, one I found cast into the sea of man’s unconciousness.

It was sealed with a cork, and while it’s label informed the reader how subpar the tale contained within would be I still feel it might be worth unfurling this scroll."

As he said this the Sorcerer stood up and walked to his grand gigantic telescope, not adjusting it to face a particular fragment as he is known to do, but instead opening a hidden panel and feeding the paper into a slot inside instead.

He pressed a button and you suddenly felt aware that a tale had begun to unravel on the plane below you. Nothing seemed to be moving down there quite yet though. That familiar chessboard appeared close to you and the others but with a noticeable difference. Only the white army was laid out.

“What are you waiting for?” the Sorcerer said. “Those who don’t intend to remain mere spectators, place a suitable piece on the white side of the board. Once you’ve all done that we can actually start.”

I will contribute one of my pieces to the board - the impenetrable guard, the leader of the Havel warriors, the greatest of clerics, Bishop Havel the Rock.

rolls a white bishop onto the board, with a big f*off shield in front of it

I hope this was what I was supposed to do…

“That piece is satisfactory, although placing a piece in your likeness would have also been enough.”

…very well. I place my piece on the board.

I place my piece, Lord Rabla the Crimson, on the board.

I place a piece in a purple suit and short red hair with a very innocent smile on his face on the board.

I guess I’ll join this game as well.

I place my piece on the board as well

I place my piece on the board.
Outrider Knight: 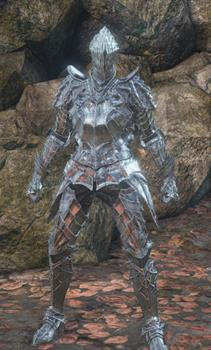 I place my piece on the board, a short girl with many friendship bracelets on her right arm.

“Very well. This will do for now, although joining in progress will also be accepted up to a point.”

With a flourish of the sorcerer’s cape time continued on the plane below.

It was the date of the official Rokkenjima meetup in Pyongyang. Multiple of the attendees awoke in an underground room. Kari was wearing a terrible Black Battler cosplay, Rabla seemed to have actually had magical powers all along and for some reason, Havel from Dark Souls was there.

In the middle of the room was a brutally gutted shark with a bloody butter knife lying next to it.

In addition Aspi was in an adjacent room with a plus sign carved into the wall. The indents of the symbol by it were filled with pieces of paper whose contents remained unseen. Aspi was still asleep, holding a pen in his hand while snoring at a tremendous volume.

This is what awoke the other occupants of his room, Vayalite, a short girl and Rhythmia. Yes, she is apparently real. She mumbled something about not wanting to keep queueing at the fringes for any longer while she was still shaking off her sleepiness.

The sorcerer reached out as a red sword came to meet his hand which he then slammed into the ground making a declaration:

“Any moves on the board made outside of quote boxes will not be accepted.”

“Such things can be achieved through [quote] [/quote] or by preceding each paragraph with a >. It might be an idea to consult the preview before pressing post, okay?”

At the instant he finished speaking the piece’s rearranged themselves to form quite the complex layout.

“The game is afoot. Do what you please, your objective will become clear shortly.”

What color is Rabla’s magic? Havel may or may not consider it sorcery and want to kill you / convert you depending on how it looks.

Either way, before then:

Havel gets off the floor. While no-one can see his face behind his stone helmet, he is very confused. He shrugs and turns to the grounded shark, examining it. He has never seen a shark before but knows a very small amount about them - namely, that they are stronger than rats but weaker than dragons, and that they are sea animals. For now he doesn’t see that Rabla is doing anything.

He takes the butter knife and examines it. He concludes it hasn’t been upgraded with any titanite of any kind and is confused as to how it died. He concludes that it wasn’t the murder weapon.

Havel frantically searches for a quill and paper, but since he doesn’t like opening doors he only looks in this room.

Your attention is drawn to Havel the Rock, likely a sign of what will later be seen as a blindingly bad streak of luck that you displayed throughout the game.

“What does your piece try to do to him, Crimson?”

[quote]
I taste-test the blood on the knife.[/quote]

Havel concludes Rabla is just a degenerate pyromancer - he believes he isn’t a sorcerer. He feels some pity and decides later he will teach some basic miracles to Rabla when he next gets the time.

Does Havel find anything while searching for a quill and paper, game master?

I go to the plus sign shape in the wall, careful to not wake Aspi.