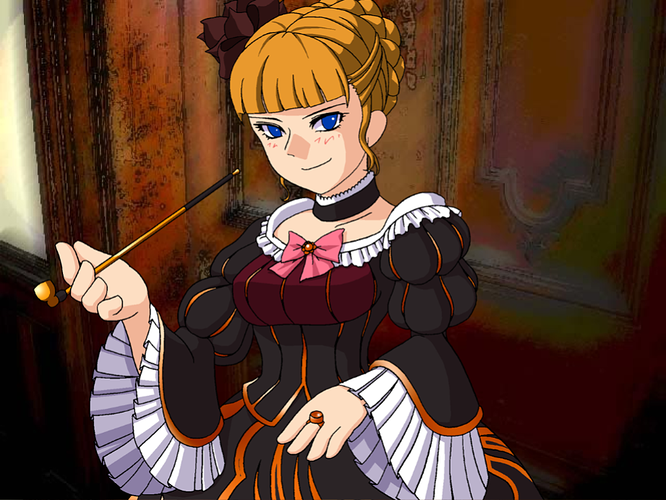 Discussion topic for Beatrice, the Endless Witch, for those who are still human. For those who have already finished the entirety of Umineko, direct your attention to the Full Series Spoilers topic here.

Please spoiler tag any reference to events from beyond the question arcs and any major question arc spoilers with the [spoiler] tag, providing adequate context in parenthesis.

Highlighting it in Red Truth is not sufficient to express my admiration for Beatrice’s character. Next to Kanon, she is my favorite character in Umineko thus far.

In Episode 1, we don’t necessarily see her so much as hear about her, but that’s more than enough to build up her initial reputation as Master of the Night, the Golden Witch of Rokkenjima. She is a being feared by all the servants, unconditionally accepted by Maria, and adamantly denied by everyone else (except Kinzo, of course). We never see her in person, but we know that she’s there and she’s a force to be reckoned with. This is an excellent method of building up to the appearance of a powerful character, as I’ve come to understand while looking at analyses of other works.

When Beatrice does appear, she has a presence unrivaled by any other character introduced thus far. She looks down at everyone she meets, tears them apart piece by piece, and puts them back together just to tear them apart again like a set of Jenga blocks. She does this to spite others and amuse herself, as if a human had obtained the powers of God and let it go to his/her head. The unyielding Battler proves to be interesting to her, as if a caged bird suddenly rebelled against its captor. She could just as easily squash him into millions of pieces, but what’s the fun in that? She’s the kind of person who savors her victories, since simply killing people doesn’t do her enough pleasure.

In Episode 2, her character is expanded upon to show that she does have a relatable, human side to her. She shows pity as well as compassion, fear as well as frustration, and also displays some semblance of honor. Because of the ruleset which magic abides to as well as Beatrice’s self-inflicted handicaps to give Battler the minimum requirement of leeway, we understand that she at least has some respect for the rules. With that aside, however, she will stand at nothing to make Battler her special furniture.

As I await the next episode, some questions do pop into my mind that I feel the next few episodes could address. First of all, how did Beatrice become a witch? I feel some sort of origin story is required to understand exactly what was the driving force behind Beatrice acquiring her powers, as well as other details such as her relationship with Kinzo and if becoming a witch was everything she expected or not. I don’t expect I’ll get her entire life story, and since the ambiguity of detail paves room for discussion, I doubt I’ll get much at all on this front. Umineko is a story about the entire Ushiromiya family, not just Beatrice and Battler, so I expect there has to be equal time given to all sides for a full understanding of the big picture.

Second, just what does Beatrice hope to gain from succeeding in the gameboard? It’s already been established that she’s just seeking to relieve herself and her guest(s) of her boredom, but I assume as the story progresses, the stakes will raise the gameboards into something far bigger than Beatrice herself. So I imagine it has less to do with boredom and more to do with pride or something she herself cannot obtain as a witch feared by all. I’d like to see what it is~

Finally, if the greatest magic is indeed love as she says, why does she not take advantage of it? Does she not know what true love is? I assume that Kinzo might have been her first attempt at such a magic, but it seems like that kind of magic was a failure, which makes me wonder if there’s a magic that’s too risky for Beatrice to utilize. She only knows hatred and malice because it’s an investment she’s seen paid off several times, but did she lose too much trying to dabble in the riskiest magicks possible? She says she keeps her promises, but no one bothers to keep their end of the bargain, so it never pays off. Since keeping promises are too risky for her already, imagine how big a loss investing in the magic of true love would damage her. Perhaps that’s why she destroyed Shannon and George so quickly, because she didn’t want anyone to pull off the magic she could never take advantage of. Maybe I’m just making stupid claims here, but it’s only speculation. I fully expect Ryukishi to prove me wrong on any of this.

Whatever the case, I anticipate Beatrice-sama’s next game. Heck, I kinda want the voice patch to come out now, so I can hear her devilish voice~

So, I want to hear from the newbies a bit more; what do you think Beato’s motive is?

Beato’s motive for killing everyone is likely the motive of the true killer killing everyone. Right now I haven’t come to a conclusion as to who I think is the true culprit. Her motive for trying to prove for witches to exist is likely linked to Maria, I feel. I feel that it’s some way of trying to make Maria happy even though she obviously dies as well. I’ll probably expand on my ideas once I’ve reread the first 4 episodes.

Well, hello! Long time, no see, but I can’t resist a good question.

I think there’s more to Beatrice’s motives than meets the eye. That goes without saying, in a mystery like this one – but in another thread @UsagiTenpura pointed out Battler is really fighting to prove Beatrice’s innocence. Which means, for all her cruelty and bluster, the Beatrice in the Meta World is innocent of the crimes committed on Rokkenjima Island.

I think Meta Beatrice wants Battler to win, but more than that, I think she wants Battler to understand her. She wants Battler to find out who she is, what she is, and what happened on Rokkenjima. The words of the bottle message, even if they’re written by an imposter, may reflect her true thoughts. ‘You who have read this, please find out the truth. That’s my only wish.’

Why not just tell him, then? Well … that’s a more complicated question. It could be because Meta Beatrice, Beatrice-the-Witch, isn’t real, exactly – she seems to be influenced by other people’s perceptions of her. It could be because Battler needs to find the answer himself. But she does get him fired up, and the crueler she is to him, the harder he tries to show that kind of cruelty is impossible. The Witch of Certainty keeps telling us that Beatrice is a good actress, so maybe we should believe her.

My working thought on it so far is that it’s heavily tied to whatever “Battler’s sin” is. Then again, maybe Battler’s sin is heavily tied to what “Beato’s motive” is. I’m not referring to the murders either, just her motive for the game in the first place. To be honest, I haven’t come up with any satisfactory ideas or theories so far. So, I’ll need to really focus on hinting in earlier episodes to come up with something workable, which I’m hoping to do before Chiru hits at least.

Regarding the incident on the island and “Beato’s motive” I’m not entirely convinced that they are necessarily bound together just yet. I’m not exactly of the mind that it’s the contrary either; I’m keeping an open mind on this one.

As @mimsy pointed out, there’s likely to be a connection between Beatrice and Maria which ties into Beatrice’s motives. These are the sorts of things I want to keep in mind as I go through the question arc again.

I regret not having something more interesting and less roundabout to say here; this is quite an interesting part of the larger mystery.