And now for something completely different in here, an interesting and quite unique literal chessboard using Umineko characters to play.

We started playing this game just some hours ago on 4chan, when unfortunately the evil Meanie Mod deleted the whole thing.

Without further addo, let me explain the rules in this:

Just to finish, this is pretty much an experiment, we can think of suggestions for additional rules since this game isn’t completely anonymous anymore (like, people who posted for one side can only post movements for that side… or something, we can decide that later for a possible next game).

Anyone willing to make the first move, just go for it! 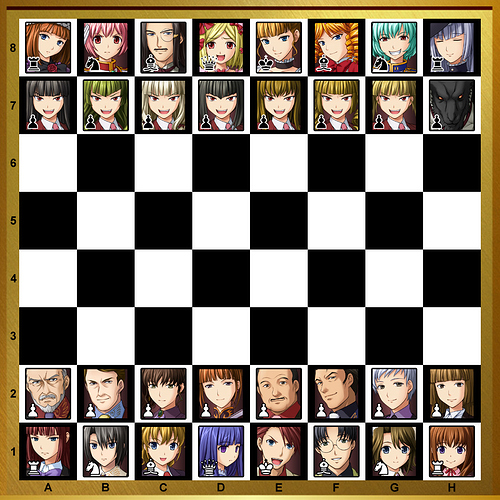 Then, I’ll start. Hideyoshi to E4
"Victory goes to those who strike first!" 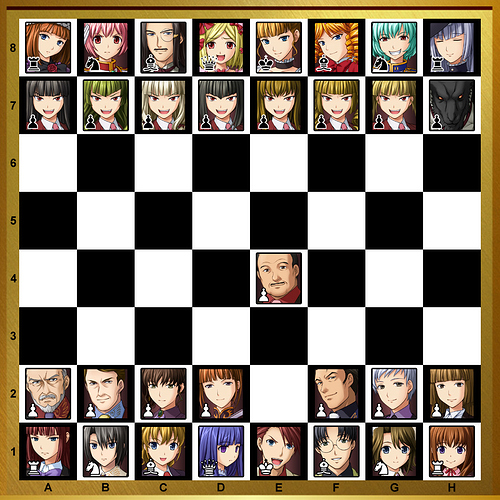 Also, I forgot to add this, but @edit_anon will be the one responsible for the image updates.

“I’m sorry, little goat sister… Your Onii-chan always caused you so much trouble.”

A good start. Board updated. White’s turn is next. 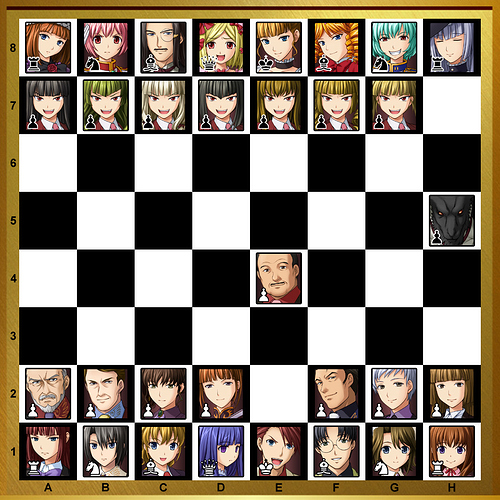 This game seems fun. I’m not so great at chess, but hopefully I can make up for it with convincing dialogue? We’ll see.

“Hideyoshi-san might have a point. After all, if one doesn’t move quickly and carefully, their prey might be stolen from right under their nose…”

No need to worry about how good you are. Having both sides open to new moves should keep the playing field relatively even. Plus, half the fun comes from the dialogue and the scenario it builds. 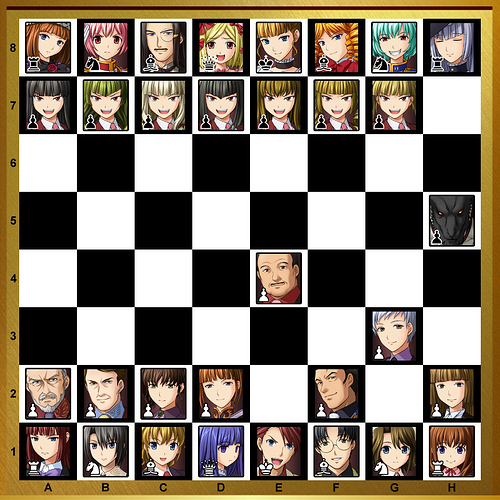 (Wait it’s not white’s turn, but you can do it next hehe)

Good line, but we still need a black move first.

Edit: It seems my account is too new to post anymore replies in this topic. I apologize for the inconvenience, but for now I will update the board via editing this comment.

Edit: It seems the issue has been resolved. 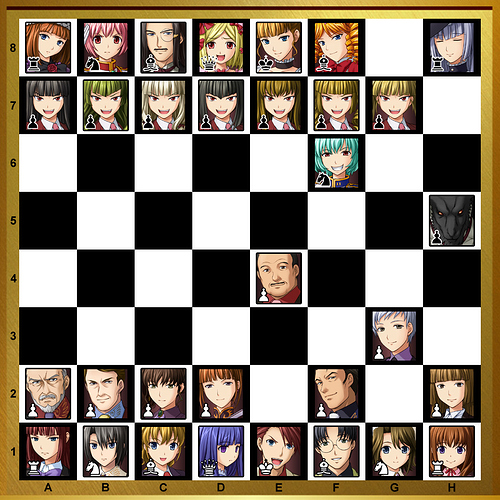 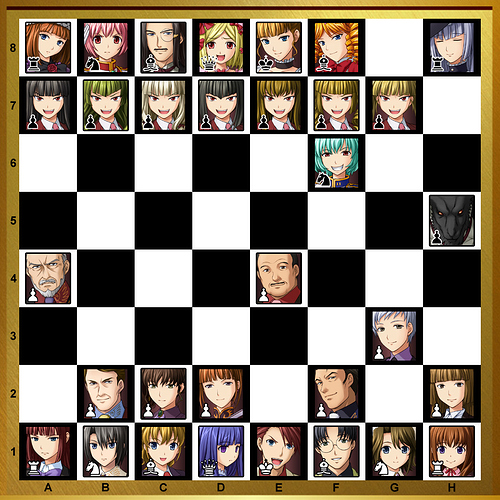 Make sure to repeat your move when the image update, @akafa123 (so we can follow the rules to a T) haha

I’ll move the black in this case.
Chiester 410 to F6
"Nihihihi! Target adquired, preparing for an incoming strike!"

I’ll take up the mantle in Akafa’s place then.

“BEATORIIIICEEEEEEE WHERE ARE YOU, MY LOVE?”

"H-hey! Now is not the time to mess with my ears… Gaap st-st-stop!

Oh no, the shot flew wild!" 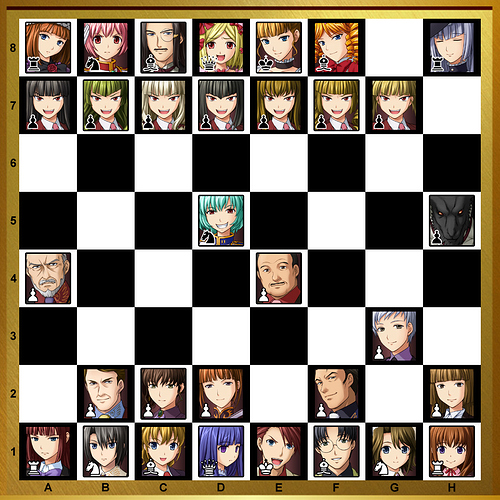 White claims first piece.
Chiester 410: Taken out by Hideyoshi after stumbling onto the front lines. 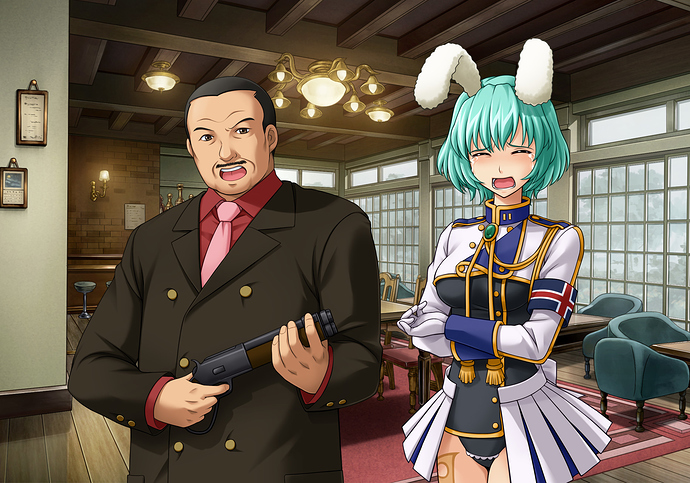 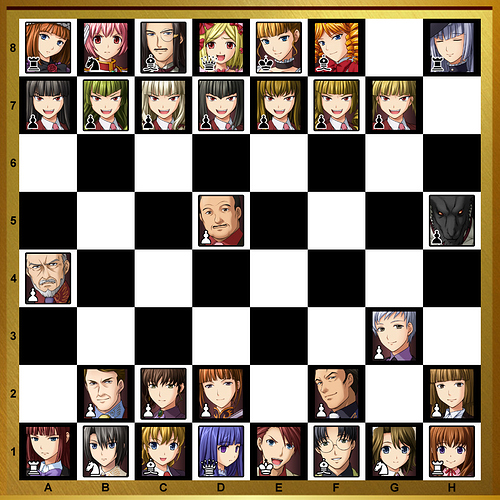 @thesorceress Add a phrase for Chiester 410 too, if you can.
That’s the fun part.

“Hehehe… I’m gonna be the first one to taste their flesh!” 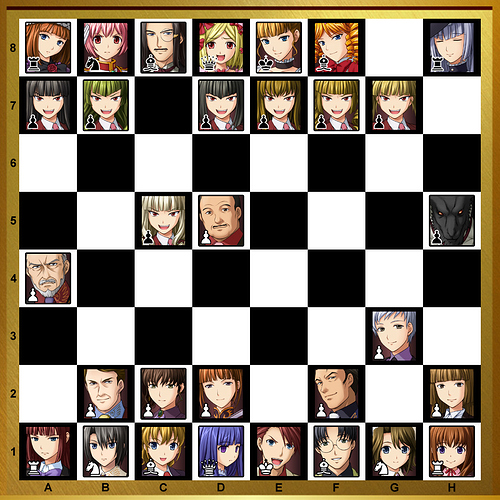 “…Take a step back. As furniture, it is my role to protect you.” 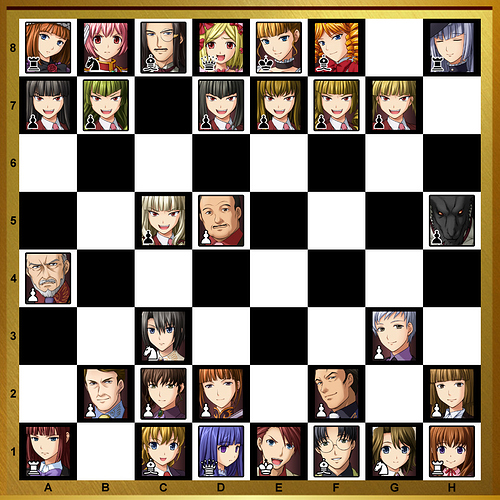