…According to a modder on Tumblr, the Steam edition comes with CGs, but they’re too bugged to display correctly? Is that true? I played through the first episode and never encountered any CGs, or anywhere they’d even be placed, so I’m not sure if I buy this or not… 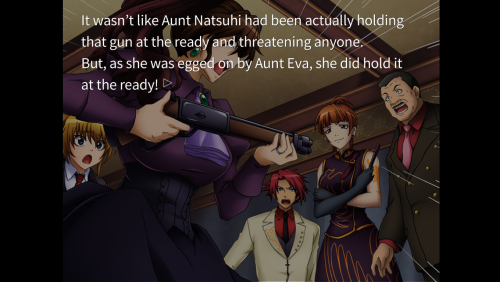 There’s a patch that fixes it, and I’m testing it out. It seems legit, the first CG is of Maria in the Rose Garden.

The CGs all exist in the game files, but they are not called in the normal script. It should be possible to enable them through a script edit if people want, there’s no need to import files because the CGs are already there.

A warning on spoilers though: The CG folder contains every CG. And I mean all of them, including the ones from Chiru. Browse that directory at your own risk.

Huh, that’s really interesting! I had no idea! I’ve seen a lot of gameplay of the Pachinko game, but I haven’t even seen a lot of these before.

The hell? They must’ve had a reason not to include them…

Use your chessboard thinking to figure out why they weren’t in the game yet the script for them and the images themselves were in it.
Good luck.

Most likely the same reason why (even though I despise the PS3 ones so much) why Mangagamer used the Pachinko sprites rather than the Alchemist sprites. Copyright can only go so far, after all, and I’m sure Mangagamer just wanted to make sure they weren’t getting slapped with a lawsuit in the same way that the official subbers for the JoJo anime are avoiding being sued by changing the names of characters and Stands. Not to mention copyright in Japan and everywhere else must be really complicated and Mangagamer didn’t want to get into that.

Pachinko CGs and Alchemist CGs are different. In a number of cases there’s a CG of a scene for one that doesn’t exist in the CG set for the other.

The CGs in the game files are all perfectly within the rights of 07th Expansion and MangaGamer to use, they just chose not to enable them.

It seems, to me at least, that they were intended to be used until fairly late on… Apparently, there are quite a few that are in the script, however not all of them are used. That said, your phrasing makes it seem clear that cutting them was absolutely a conscious decision that had nothing to do with any of the parties involved being unable to use them.

There’s a variety of reasons this could have happened, but, using Chessboard Logic and approaching this as a mystery, it seems like the CGs were hidden to be found. Renall, you worked on the Steam release? Or at least, you followed the project very closely? Surely, when you made the topic that linked to the nsa decompiler, you knew that the CGs would be found, so they aren’t exactly meant to be classified, clearly.

The most curious thing about all this to me would be the CGs EP8 2a and 2b, which I’ve attached below. I know @UsagiTenpura was the one in charge of editing the art assets, which begs the question- Is this their doing? Surely OIZUMI couldn’t have been the ones to pull the plug on the CGs, could they be? I know that everything was run by 07th Expansion, but maybe OIZUMI weren’t happy with the changes made to their art assets- Although I can’t quite see why they’d even matter, if they were for some reason displeased. Even if they were, is there any need to include both versions of this CG?

(Also, while this thread is being used to discuss the how and why of these CGs, could it also be used to generally critique them? My favorite CG is Ep2_4.)

I didn’t work on anything, I just dug into the files within about 10 minutes of the MangaGamer release and found them. I know nothing about how and why they exist or why they’re not enabled.

Thanks for the clarification, sorry about barking up the wrong tree!

It’s worth a mention that the CGs were first publicized by 07thInquisition’s DamnDrone, who has already created a Spanish Language patch for the Steam release.

Wow! This is an interesting find.

Hmmmm. Makes me even more tempted to reread Umineko since CGS!

I’ll have to patch my steam copy then.

Ok this is really interesting. I wonder why they’d have all these CGs in the game but not use them than, maybe if there were issues loading them correctly than they could release a patch or something in the future so they work.

This is so cool and ESPECIALLY interesting… How do you find the CG folder? I just finally got the Steam release but all I can locate easily are the sound effects and BGM. Is there a program I’d have to use? I’d love to look at all these.

Somebody uploaded the CGs (including the unused Chiru ones) and the sprites for the EP1-4 characters online. Forgive the site, as it’s the only place where it can really be hosted. Also, it obviously contains Chiru scenes and sprites for all of the characters in the first games (heck, you can see the Chiru CGs on the first page!), so if you’re the type who doesn’t like spoilers (even if they don’t make sense out of context like most of Umineko until you’ve seen that scene and even then), I don’t recommend checking the gallery link.

Thanks! I don’t have to worry about spoilers, but I just wanted to see what the CGs were like.

So uh, how exactly does one patch the CGs into the game? Was that ever determined?
EDIT: Guess this answers my question.

CGs not showing up by default (with instructions on how to fix). :: Umineko...

Looks like showing CGs is disabled by default. To show them,you can add this line just after *set_oldnew_bg mov %show_cgs,1 I've also uploaded a fixed script file, in case you have trouble editing the 0.utf script. mediafire.com/?ebkbiq5abb987 Some...

I’m not clear on exactly what they’re saying you should do in your link. They’re saying there’s one single place you just need to add ‘mov %show_cgs,1’ and then CGs are enabled when you play through?

I don’t know what language/engine MG Umineko runs on, but from the looks of it, yeah - “mov %show_cgs,1” looks to be a command to set the “show_cgs” flag to active.

On that note, I went looking in the 0.utf file for the first four arcs, and found this:

It starts at line 266,693. Sounds like someone forgot to activate them, whoops

This is what the *set_oldnew_bg bit refers to:

I haven’t tried it myself, but what that post is suggesting is adding the mov %show_cgs,1 line to right between *set_oldnew_bg and getparam $witchh11,$witchh12,%witchh13,%witchh14, like this (EDIT: The 0.utf file that’s included on the post (Valve didn’t do a good job of hiding the link

) has mov %show_cgs,1 after the getparam line. Not sure if it’ll make a difference in practice, but just FWIW):

From a quick look, it seems like the CGs are disabled in MG Chiru as well… I’m gonna try enabling them and will report back on what happens.

EDIT: Well, uh, hm. I haven’t actually tried enabling CGs in Chiru yet, because… it doesn’t look like they’re even defined in the first place. Spooky.

EDIT: Just checked with ???5 - Not including any spoilers, but one of the CGs present in the game’s files is definitely meant for there, and it does not appear. I don’t think getting Chiru’s CGs working is impossible, but it’ll require a lot more work than the Question Arcs did. I’ll start looking into it tomorrow.