Which MBTI Personality Type are you?

I got INFJ-A however I do believe that’s not entirely correct. I have tried MBTI tests before and have almost always gotten INTJ which I do recognise alot of within myself (especially their typical traits of being independent, open-minded and absolutely clueless in romance). What I personally think makes it more difficult for me is that I’m most likely also an HSP (Highly Sensitive Person) that has probably made my F (Feeling) stronger than normal INTJ’s and so pushes me into INFJ during tests like this.

INFJ-T was my result!

I took a quiz years ago and I got INTJ, but this time I got ISTJ. I think that’s more accurate. Never saw myself as a full on INTJ.

I’ve done this test before a few times, and I always get the same result… which I share with @Quixote and @SleepingPliskin. 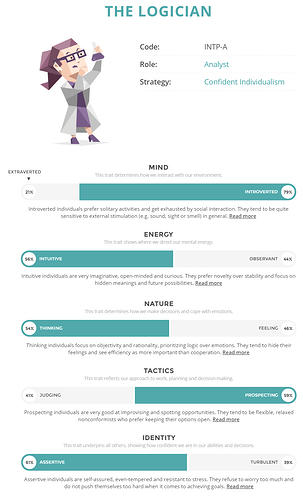 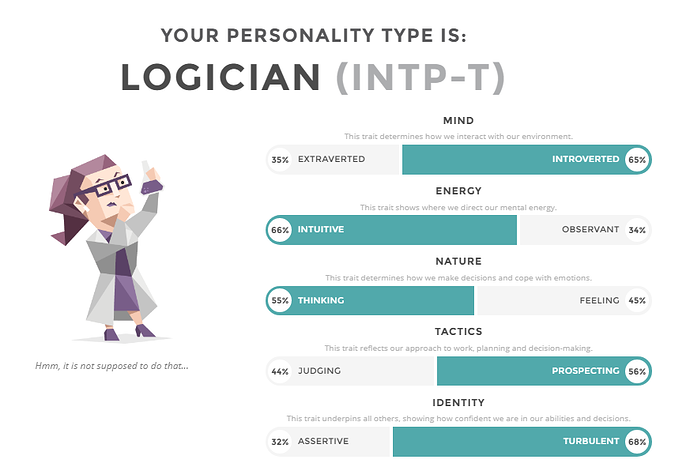 Same as a year ago. 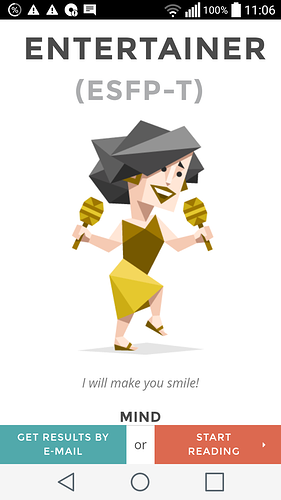 Welp. I am the black sheep of Rokkenjima. 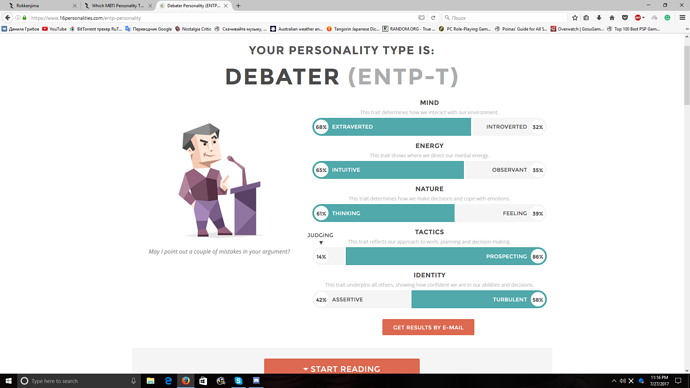 It feels like some part of me has changed since the last time I took this test. Maybe I’ve gotten softer over the years…

Definitely a bit of a dull topic, but I’m bored, so… 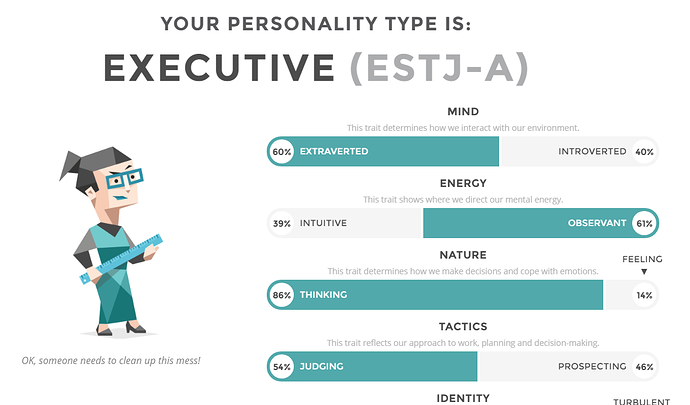 Huh, that’s odd… This wasn’t my type last time I remember taking this test and frankly, while I do value order and all, I don’t relate at all to this type. Hmm, I usually take this test on this website, so I took it there again and I turned out:

And I definitely agree with this type more.

Though reading the descriptions on this website of yours Pli, I relate more to INTP…

I’ve taken a few of these. I get different results depending on the day and how the questions are presented – this time I got the Advocate (INFJ). I’ve gotten that a a couple times before. I tend to think of these personality tests as astrology for the modern age – they can be useful for some people to gain a deeper understanding of themselves or a situation, but ultimately people are people and reducing personality to a series of 4 to 5 letters is a tool best left in the realm of self reflection . 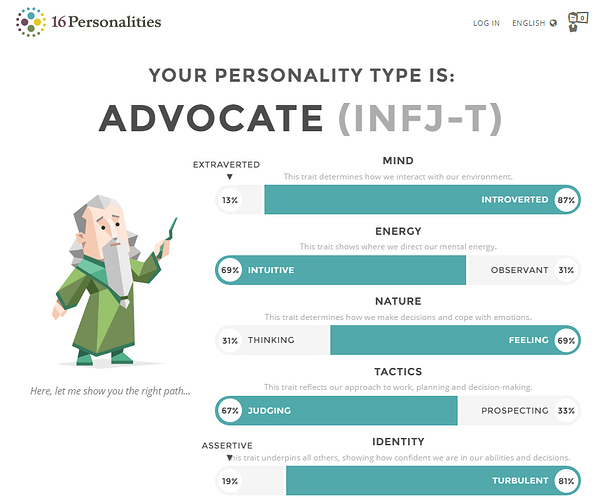 Me, Doldod, Sapphire, and Wonderlander need to form an extrovert club!

I can’t argue with that lol. The reason why I wrote this topic, to begin with, is that every time I take this test in different websites, I’m always an INTP, and I’ve taken these test more times than I’m willing to admit lol, though only when I’m bored lol. The stuff they say about INTP I do agree is more aligned with me, but the emotional parts are only half aligned. The website states that it is a stereotyped pattern and that just because you’re a certain type, doesn’t mean it’s claiming to be all the things it says. It’s a cop out answer but it makes sense.

P.S: I promise to make a better topic lol

Kinda tempted to attempt to create an actual personality test. You know personality psychology is kinda my specialty.

At the very least, I’m pretty certain I could judge most people’s major temperamental traits and natural cognitive inclination, but when it goes into persona, self-perception and nature vs nurture it gets a bit more messy…

Oh for the record MBTI tests (including done with a professional) claims I’m a INFJ, but pretty close to the middle on everything except N.

… That’s a thing worth mention, while at it. MBTI tests done by professionals tend to rate the majority of people “near the middle” on most traits, with the one exception being introversion vs extraversion. A perhaps interesting thing is that MBTI introversion vs extraversion actually tend to have a negative correspondence with the same parameter for other tests, such as the (generally much more used) OCEAN test. I’d also argue in general that MBTI test as best is more telling of one’s self-perception than anything else.

Well, probably boring people with this.

Not at all! Reading your post regarding the failings and information of the MBTI tests is interesting. I think I’m willing to agree that these tests are more of a self-perception test than anything, but it can be useful if the person is being as honest as they can be.

. As you are a psychology student, I would love to know how you would make the test itself.

Well that seems to have interested people far more than I thought, I’m honestly surprised. Thanks.

Hmmm this would be a thing to create ehehehe… I guess it’d be informative at the very least to inform people about these major traits.

I guess an additional thing I could add there is that the majority of traits goes on a scale, rather than a X vs Y thing. At best one could be described as being “more X than the average” or “more Y than the average” which isn’t really helping things to make a simple MBTI like test to begin with. I’ll think about how to do this when I have time and (sadly) a better health.

I’m simply too extreme on the first three letters to get anything but INTJ, but it was a 5% split on judging and prospecting. Never got that result before.

I do find it very interesting that most people on this forum are people with rare personality types.