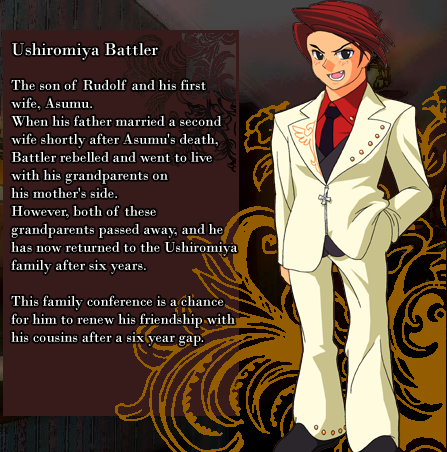 Discussion topic for Battler Ushiromiya, the protagonist of Umineko When They Cry.

Please spoiler tag any reference to events from beyond the question arcs and any major question arc spoilers with the [spoiler] tag, providing adequate context in parenthesis.

Spoiler free, huh. Lemme try.
He’s a guy, has read hair, which is stylish, meow!
And his clothing is nice, red undershirt, black tie and white/beige suit.
His composure tells us about his personality: he’s laid back back but still classy, ready to stand his ground.
Same goes for his expression: he’s confident, rash but there’s something backing it up.
I wonder what will happen…

Read the OP. You can talk about up to Episode 4, barring major plot twists~

Someone I know legit dropped Umineko because Battler was a perv. True story.
I guess he doesn’t fare too well if held to high standards, he is incompetent after all.

Sorry. Are there any spoiler friendly threads to talk specifically about Battler?

Also, I spoilered my post in case any one gets curious.

I mean I donnu how it would do, considering this one being a barren wasteland, so to speak.
I mean, I would rather have a char discussion with spoilers, cause you can discuss their actions and wutnot and their whole development. Why keep it to a certain point when you have the episode discussions.
Then again why not? Life is useless anyway.
Oh no, did I just spoil that the protagonist might potentially grow as a character

@Blackrune I had a friend drop Umineko because of Battler’s antics early Episode 1 as well, heh.

I guess it’s a pretty valid thought to assume that if you cannot tolerate the protagonist, you won’t be able to tolerate the rest of the work. It’s true Battler doesn’t really show his better sides until at least the end of EP1. (and then the whole thing arguably becomes slightly less about him. EP1 mostly had everything from his perspective though.)

@Pandora
I don’t think Karifean was zealous enough to create a second set of character threads xD but there’s nothing preventing you from making one yourself. Uh, I think at least? You should be able to make that new thread.

Battler’s early interactions with Shannon in ep1 are pretty uncomfortable and pretty indicative of his myopic ability to comprehend other’s standpoints, in particular with his “joking” attempt to grope her.

What was just a joke among friends for him is complicated by Shannon being a servant. Where a friend could object and make clear where boundaries lie, a servant cannot.

I can sympathise with someone dropping Umineko here on the assumption that the narration (and writer) are as myopic to these issues as Battler is, but that’s a shame as these issues are addressed later.

Does it count as an attempt if he had no intent to grope her?

He would have stopped if she said so. He’s lived away from the main branch entirely for a while, and just kind of assumed that Shannon was still his friend just like old times. I’d understand dropping if there was an additional instance of this, but aren’t we all learning creatures?

Also, wasn’t Shannon shirking duty being in that room with them, or wasn’t she on break or something? You can’t blame Battler for not thinking of her as a servant during that interaction.

Please note, if part of the (unsuccessful) joke/plan was to actually grope her, then I wouldn’t be defending Battler in this situation.

But it was never part of the plan. At least, that’s how I read the scene.

I agree that Battler’s plan wasn’t actually to grope Shannon, it was meant to be a joke where he’d be interrupted long before anything happened.

My comment read a little harsher on him than I intended. I don’t think his actions were particularly grievous, just that they demonstrated a lack of awareness of Shannon’s position. There’s no true off-duty state for a household servant like Shannon. While on the island there’s always an expectation that her wishes come second to her masters and even when playing, she’ll always be aware of their role as her “betters.” But I don’t mean to be unduly harsh on Battler for his lack of awareness, this is a minor criticism. His was an easy mistake to make, especially since he hasn’t been raised with servants at his beck and call.

Yeah, I’ve tried to get a friend into Umineko because she like how I RPed Beato and Ange (and she likes witches), but she wanted Battler dead and couldn’t get past his antics. I explained them but she adamantly refused (also hilariously, what little she knows of Bern, she hates, primarily because she’s German). I think Battler gets more tolerable after EP2, and personally, I like his character best in EP5.

On an aesthetic note, does anybody think that Raiko Horikawa from Double Dealing Character (a Touhou game) look like a female Battler? 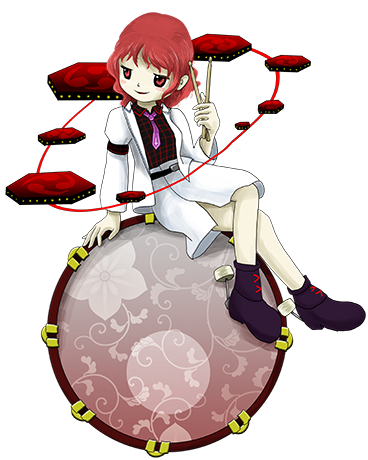 I honestly really like Battler as of now. Some of his early story antics maybe weren’t great but as we’ve established, he was at least never actually going to touch anybody inappropriately.

His other flaws are notable to me because they can be frustrating without making me dislike him.

One thing I think that might be worth noting is that his perspective may inform the viewer somewhat: one of the first things that happens in the series is that he expresses dislike for his father, however the narrative unfolds the reasoning for this to be not a terribly awful thing. (Given the end of Chapter IV, I’m guessing the Rudolf household’s story isn’t done though) Rudolf from what I remember never does anything worse than mild…rudeness perhaps? with some of the other characters. (He certainly seems nicer than his sisters or his father…) EDIT: Well, I guess he was something of an adulterer, now that I recall, but that not even being why Battler was mad at him made me forget this detail perhaps.

Battler’s…attempts to disprove witches can be frustrating, but certainly his continued efforts to do this will not suspecting his family can be rather heroic.

And hey, Ange likes him! So I can’t be wrong, right?

I am very curious as to how Battler’s relationship with Beatrice progresses.