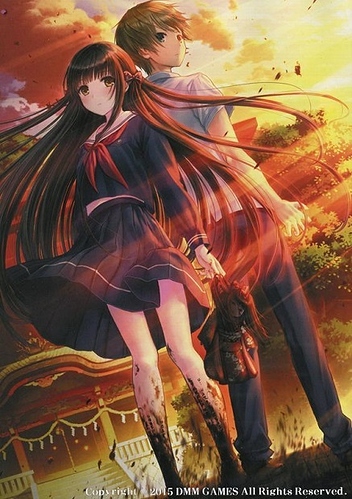 General discussion topic for the Iwaihime franchise, written by Ryukishi07. In the absence of any fitting topics, free to make your own topic if you have something specific you’d like to talk about. If a conversation here ends up flowing in a certain direction, don’t be afraid to continue it in your own topic! Keep the “reply as linked topic” button beside each post in mind.

When posting here, please use your own discretion to tag significant story spoilers with the [spoiler] tag, providing adequate context for the spoiler in parenthesis.

The launch of the Rokkenjima beta will be remembered as the same day Iwaihime was launched: the 29th of January 2016! I’d love to hear if anyone here has picked this title up.

The premise for this one sounds really interesting actually. Specifically Kurokami carrying the doll everywhere… I don’t recall having seen or read anything along those lines before and it’s got me pretty curious on how it’ll play out.

I’d love to hear if anyone here has picked this title up.

I’ll probably end up picking it up soon, though it might just sit on my shelf for a while as I catch up on some of the earlier stuff too. Heh.

I’ve read this. I really liked it! The story is well thought out, so it’s a very rewarding experience to have the answers to the mysteries revealed bit by bit.

I’ll never understand how it managed to get an all-ages rating, though.

Let’s begin this mini-review (which will be absolutely spoiler-free except for the screenshots at the end) by one statement: Iwaihime is nowhere as good as a genuine 07th Expansion title and is at lightyears from a When They Cry complexity BUT it’s still a good entertainment on it’s own.

First, the art style. Ryuukishi is an awesome writer, nobody can’t deny that. But when it comes to his ability to draw, that’s an other matter. Some people like his style but let’s be honest: his drawings aren’t good. His art is pretty childish in the traits and his characters don’t look good (Umineko’s PS3 version was a life-saver for me).
Being a DMM-title, Iwaihime wasn’t developped by Ryuukishi and his usual team. Ryuukishi was only responsible for the scenario (the whole scenario, not just a route like Rewrite). The art was made by Kazuharu Kina (and an other dude for the background), a pretty good chara-designer who made his debut on the VN scene two years ago. The art is pretty, really moe-style (like the anime we use to see since 2000) but know how to be creepy at times. It would be really nice if a chara-designer like that could work on the 07th Expansion titles as it really contribute to the experience. 07th Expansion titles need to be Visual Novels and not just Sound Novels.

Then, the scenario. You like Japanese folklore? You like creepy cursed dolls? You like fated encounters? You like Alice in Wonderland? Couple that with some gorish scenes, characters who go mad and a little romance intermingled in the whole thing and you have Iwaihime. It’s nowhere as original as a 07th Expansion title but it delivers a good amount of entertainment. It’s a lot more developed that your basic horror movie (thanks to Ryuukishi) so it’s quite enjoyable on both horror side and story side. But we really feel that Ryuukishi couldn’t do everything he wanted. The gorish scenes are really limited (censored too) and the VN is rarely shocking (except one CG where I was like: “Did they forgot to censor this one?”). On the other hand, there are some teary moments who can let you drop a tear or two. The mystery was okay, I guess. Better than average. It’s always nice to know what happens and why.

The characters. Certainly the most mixed point of the game. You liked / loved Battler? Forget him, your main character (Suzumu Susuhara) is just your basic protagonist of every cliché series. He’s plain, quite handsome but not too much, childish (Boku ha, boku ha, JUST STOP) but has his badass moments, like every main character from a harem series. Surprinsingly, he is voiced and has an appearence. Don’t know why though. He’s not that bad but you’ll have trouble remembering him when we ask you to name a good main character.
Then you have the most unique and original character of all times: Tsubaki(ko), the childhood friend of the protagonist. Well, I have to admit that she has her good moments, she’s not that stupid and sometimes contribute to the plot.
And you have Toe (Toé, not your foot). At first, I was like: “Oh, the silent girl type who looks creepy, speaks creepy, wear creepy clothes and has a creepy doll”. But I must admit that she REALLY is a good character. Well, that’s pretty logical since she’s the main female character but when I saw the protagonist, I thought she was going to be your typical kuudere character who lost her parents somewhere in a bush and thought that being lifeless was a lifestyle. Toe is a really interesting character with a good backstory and a well done development. She really know how to creep you out (I hate Ichimatsu). I was really attached to her throughout the game and I must say that it’s been a long time since I saw a character like that in that type of VN.
There are also some side characters who go from the nice to the oh-my-god-why-do-you-even-exist.

The sound. Well, it wasn’t Dai who composed so… OK, I’m going to stop being a fanboy. The soundtrack is nice, feels like old Japanese music at times but also incorporates some electronic tunes. It reminded me of Silent Hill (just listen to the opening) at some point. I don’t know any composers for the game but I knew there are multiple persons and that Ryuukishi was the sound director. It’s good, nothing fancy.

In a nutshell: Iwaihime is nice, a good Visual Novel, not great. Ryuukishi wrote the scenario, okay, but he wasn’t as implicated as he is on his own works. DMM certainly told him to go easy on his readers as the scenario isn’t as complicated as usual. I personnally think that Iwaihime is a really good introduction to his writing style. You easily get used to his way of describing things, characters and situations. To synthesize my opinion, I give it a 7,5/10 with a polarisation of -1 / +1,5 depending on your approach with the genre and how you compare it with Ryuukishi’s other works. 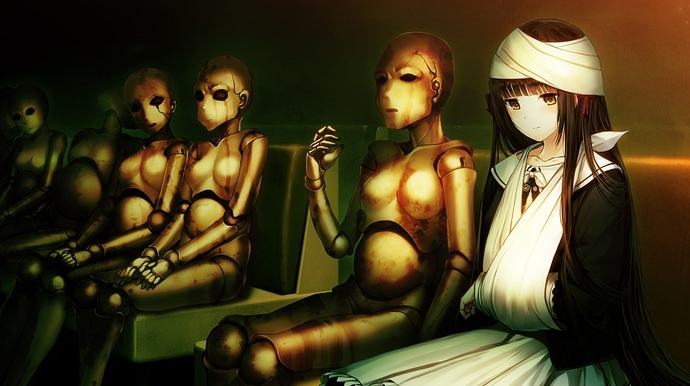 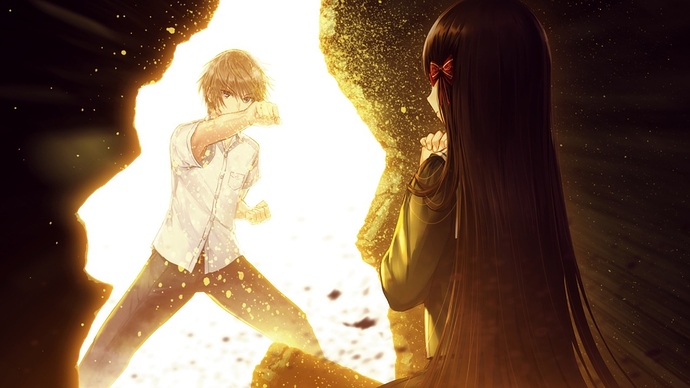 2 cool for U bruh 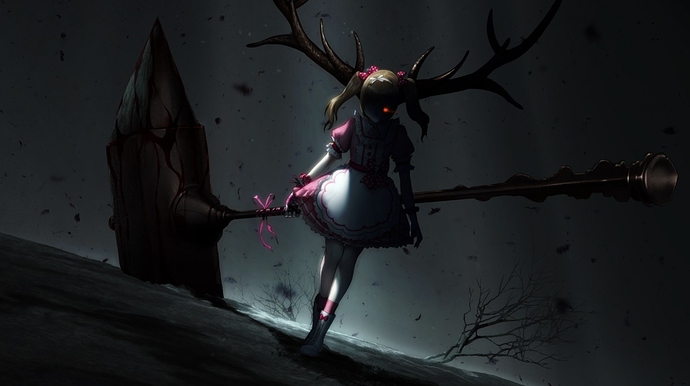 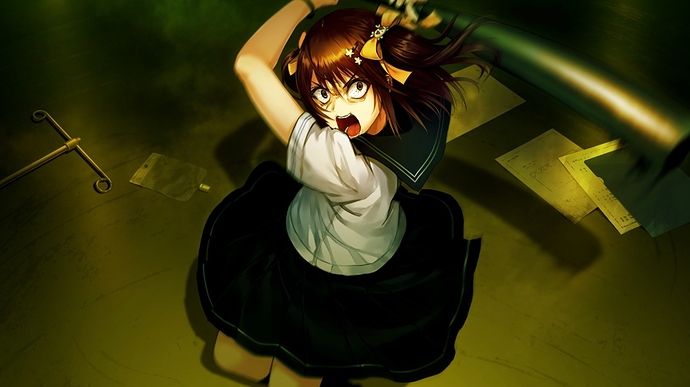 Apparently they have something to reveal about this on the 20th. Here’s hoping it’s an anime adaption!

Ooh that would be interesting. Do you think Iwaihime would make for a good anime?

I think it could! Unless they base it on the manga adaption. Maybe I’m being unfair towards the manga, seeing as I only read the first chapter, but I thought it was pretty awful.

Well, it turns out the announcement was Iwaihime phone cases.

Is anyone planning to translate this? It looks pretty interesting.

I’d certainly love to read it… haven’t heard of any translation projects though.

Not even Witch Hunt announced anything?

Witch Hunt’s got their hands full with the Steam versions of Umineko Chiru and Golden Fantasia.

Even then, I wouldn’t assume they’d tackle it. They’ve already done a lot with Umineko and Rose Guns Days, I wouldn’t take it as a given they’d jump on it right after finishing their current projects.

No word on Spider Lily Translations’ front either. They haven’t updated since Higurashi came out on Steam.

Are there any infos about a Translation of this? I’m kinda interested in it.