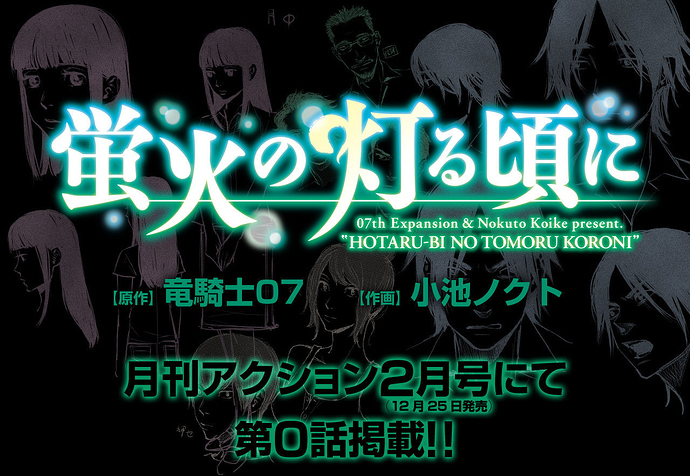 General discussion topic for the Hotarubi no Tomoru Koro ni franchise. In the absence of any fitting topics, free to make your own topic if you have something specific you’d like to talk about. If a conversation here ends up flowing in a certain direction, don’t be afraid to continue it in your own topic! Keep the “reply as linked topic” button beside each post in mind.

When posting here, please use your own discretion to tag significant story spoilers with the [spoiler] tag, providing adequate context for the spoiler in parenthesis.

So I’ve read the novel prologue as well as Chapter 0, and it’s looking like this is going to be much more of a fantasy than mystery this time around. Maybe not the WTC5 we’ve been hoping for, but at least it’s connected to the WTC series through its characters. I kinda get the feeling that this series is gonna be more of a psychological thriller with fantasy and mystery elements sprinkled throughout, which I am pretty interested in. The visuals remind me a bit of a horror manga with how its presented.

I’ve only read the prologue so far but it was interesting. It’s far too early to make any judgements about the series as this is Ryukishi we are talking about and things are rarely as they seem.

Does anyone know if the manga is being translated anywhere?

I’ve read the prologue and I have to admit that I really liked it, and my personal guess is that this may be a work to introduce WTC5 in some time, but that’s just my guess Ryu can surprise everyone of us making Hotarubi at the level of a wtc.
The manga, I’ve read chapter 1 only, portraits what happens when the girl goes to the town but it does not include Bern and Lambda, that’s only for the Ln

Finally got around to reading Chapter 1. Guess we’re stepping back and going back to seeing the family.

There’s a lot of context that I haven’t fully grasped, but this doesn’t seem like a very happy family at all. And hey, we even have the grandparent that owned a vast fortune, though in this case, it all suddenly disappeared and lead our heroine to be indirectly blamed for it. Different use of the fortune trope, I see.

I guess my prediction was right, that this seems to be some kind of Zombie story. I can tell the mystery is going to take a back seat in this story. The title page spells it out: it’s a survival horror story.

I wonder if this, like Higanbana, will receive a Visual Novel adaptation eventually?

I’m not too interested in zombies, so I’m not terribly excited about this so far, but that could definitely change, depending on how the story is handled.

Hmm, this is the first time I’m finding out about this, it’s piquing my interest. Let’s see if it will impress me.

Edit: I read the prologue chapter, in which random bits and pieces about the story were shown, or at least that’s what it seems like. So unfortunately my interest is not piqued anymore, like most of you have commented it looks like it will be more of a survival horror rather than a mystery, and frankly, I’m not much interested in those. And also it seems to be a zombie story, which is also something I don’t really like. I’ll keep checking this thread though, if it gets interesting, I’ll start reading it again, maybe.

Yeah, I’ve read the prologue too and basically anything to do with Bernkastel or Lambdadelta interests me greatly! I really can’t wait to read the rest, especially just to see how Takano Miyo is gonna play into the story. Is Chapter 0 the only chapter out so far? Can’t seem to find more.

Chapter 1 is around somewhere too, I heard~

Sweetness, I shall go find it~

Goldsmith’s uploaded the first chapter to his YouTube channel!

Okay, so Hotarubi takes places in the When They Cry universe.

(Higurashi, Umineko spoilers) But it seems extremely likely that there’s going to be supernatural elements in Hotarubi. Some people like to bend over backwards to try to make it so there’s no “magic” in Higurashi because of Umineko. I wonder if they’ll try to do the same for Hotarubi?

Hmm, I wonder. I wouldn’t be surprised if this was a supernatural story, plain and simple. But I would be intrigued if there were more to it than that.

I wonder how long Hotarubi will be?

I wouldn’t mind it much too if it was just a plain supernatural story, but maybe a little something more would be intriguing. Like say, one of the characters from Higurashi or Umineko being related to the events in Hotarubi and getting a few answers to some of the unanswered questions about this character? The character doesn’t have to have a big presence or role in Hotarubi at all, just something small that would reveal something new about them, which I think would be pretty interesting.

Well, Hotarubi does feature a character from WTC quite prominently, though for spoiler reasons I won’t say who.

Ha, that’s enough of a spoiler within itself though. Thanks for mentioning it, I may continue reading it now that I know about this.

I mean, I think it’s made pretty clear in the prologue short story.

I just read through the Prologue and Chapters 1 through 9. I must say I’m pretty invested at this point, would love to know where this story is going.

Of course, as most of us probably agree, the primary draw is in the When They Cry connection. I’m trying to figure out what the purpose of connecting it to WTC is. So far it’s neat that Takano makes an appearance in the story, so it’s interesting as an alternate reality version of her for those who like her character. I imagine her as an alternate reality version of Takano in the same way that some theorize that Erika is for Rika. But beyond that, I have yet to see where Ryûkishi07 is going with it. There are similarities in the setting to Higurashi and in the family dynamics to Umineko, but beyond that nothing else has really surfaced. It reads as a straight supernatural survival horror.

I will say that I enjoy the idea of a ‘pocket dimension’ horror and I look forward to Ryûkishi07’s take on it. It’s even more interesting that we have a canonical idea that Lambda is playing the system from a meta perspective. There is very little indication of what Bern’s role might be though. Perhaps she’s just taking revenge on Lambda, throwing her into a constructed hell as revenge for the fate-locked Hinamizawa she was trapped in during the events of Higurashi. As of chapter 9, there’s no indication of any piece Bern might be affiliated with, so perhaps she’s in some sort of Gamemaster role, using the forces of this pocket dimension to torture survivors.

My biggest points of interest right now are 1) How long Takano has been in this world and 2) what happened to the characters that were intorducted in the Prologue? From what I gather, the characters we follow in the manga are entirely different then the two families that Takano meets in the prologue. At this point in the story, having learned that there may be other safe havens in this world because of more talismans, it’s possible that Chiharu and the others are existing simultaneously and we have yet to meet them. Alternatively, it could just be an indication that Takano has been in this world for a very long time, outlasting any particular group of survivors. Or perhaps she’s in some sort of repeating world herself, as per normal WTC fashion.

My last thought is perhaps these two suns have some sort of connection with Haworthia? It’s clear that the two suns is an important setting detail, indicating that they are in this pocket dimension. We haven’t seen that sort of celestial connection in WTC before. And now Haworthia has a lot of talk about ‘protecting this star’ and such, also a celestial perspective. Really makes me wonder…