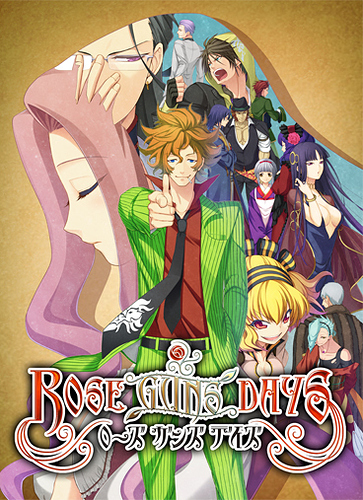 General discussion topic for Season 1 of Rose Guns Days. Please tag references to later Seasons and outside works with [spoiler] tags, providing adequate context for the spoiler in parenthesis.

While this topic will serve as a general hub for discussion of the Season, if a conversation ends up flowing in a certain direction, don’t be afraid to continue it in your own topic! Keep the “reply as linked topic” button beside each post in mind.

What would you rate this Season?

It’s a shame to see all the RGD topics completely neglected, so I might as well kick something off.

I’ve been re-reading RGD alongside a friend who is reading for the first time. I find that overall RGD is a lot less ambitious a work than Ryukishi’s other main VNs from a perspective of multilayered storytelling and intricately weaved symbolism, but it’s got just as much passion poured into it.

Tone wise Rose Gun Days S1 is a lot lighter than most of Ryukishi’s works, despite it being about Mafia gun battles. Ryukishi’s alternate history Japan provides an interesting setting to explore some of the ingrained issues of Japanese culture in general, as well as being a genuinely interesting scenario on it’s own.

Season 1 focuses on growing the cast and introducing the initial conflict. As can be expected of a Ryukishi work the cast is large and every character gets development. Real stand out moments in that regard are Wayne’s throwing away of his pride when he realizes it’s just holding him back and putting Rose in danager, and Richard’s scenes ‘threatening’ a troublesome customer and at home with Yuuji.

S1 ends on a cliffhanger which is highly unusual for a Ryukishi work. This has an impact on the entire structure of RGD as the 4 major arcs are out of sync with the 4 episodes. The first arc is the longest due to the first three chapters (conflict with Crazy Alfred) being an introduction before the real conflict with Caleb sets in. As a result the last arc will be the shortest, but I’ll talk about that more in Final Season.

One last element I want to talk about for First Season is the minigames. I highly recommend keeping these on as they add a great sense of tension and urgency to the fight scenes. I love the way they were implemented as it allows the player to get encaged in the combat, and also allows Ryukishi to avoid getting in to the nitty-gritty, which would only bog things down. The major beats and overall flow of the fights are described in the narration, but the rest is conveyed via the games and the relative amounts of attack vs defend phases. Trying to go for a high score or max rank (and thus max difficulty) can be addicting, but I highly recommend against save scumming on your first read of the game.

I loved seeing Leo run around making pasta puns and his glorious English.

The minigames were so much fun too!

I was surprised at that ending as well, it’s definitely new for Ryukishi. Waiting for months on end for the next VN was so nerve wracking!

A post was merged into an existing topic: Rose Guns Days General Discussion

I finished reading through Season 1 of the VN the other night, and holy crap, Rose Guns Days has completely blown my expectations out of the water, and I’ve heard it only gets better from here!

I went into Rose Guns Days completely blind, only knowing that from the few people who have read it I’ve seen, none of them had much negative to say about it. Although, that didn’t mean I was expecting anything amazing- but that’s exactly what I seem to have gotten myself invested in.

Even starting with the first few minutes, I was laughing like a goddamn idiot at Leo’s “cool guy” personality. The amount of charm this Season put out right from the beginning was great. The characters and their interactions was definitely a higher point, as they all are struggling with their own somewhat similar internal demons, and for the most part, respected one another for that.

For quite a while, things were mainly just action-packed fun with some really great characters. I knew Rose Guns Days had to take itself seriously eventually, and boy it did exactly that. Rose being captured, and what was likely done to her gave me some serious chills. Caleb releasing her to Leo, with that held respect of being “war buddies” was also something that hit home how much this war meant to these men.

Speaking of antagonists, while Alfred could be a bit… uh… “typical crazy 1940’s villain” at times, the dynamic of both him and Leo fighting their own wars behind the scenes is something I found and still find really engaging, especially now that Caleb has been thrown into the mix. The idea that, in this cruel alternate history Japan, every single person is fighting their own war, despite the actual war having just ended, whether it be a lady of the evening, or a “rat”, really hit me in a weird place. I feel like there’s a damn good message in that, one that I’m curious to see if they keep up in future seasons.

On the topic of future seasons: I wonder if any of them are going to end in a cliffhanger as great as this one! That final battle with Wayne, Leo, Rose, and Claudia was one of the most intense scenes I’ve read in awhile. Claudia trapped in a burning building, and Rose running away, all while Wayne and Leo put themselves through what likely could have been their last stand, was absolutely brilliant. Leo’s line to Wayne about how, even if Wayne hadn’t been on the battlefield, that they were war buddies nonetheless made me want to hug those two amazing bastards. I still kinda get giddy thinking about the climax scene, it was that epic. The BGM for it was perfect, one that almost rivals “worldend_dominator” in Umineko for me.

Of course, with the after-credits 2012 scene with Jeanne and Julie, we find that Wayne survived the ordeal, with a hilarious line about his nickname. Considering what had just gone on a few minutes prior, I thought that was a nice touch.

In any case, I very much look forward to reading more of Rose Guns Days. Something about this series feels special, and every moment has been a blast so far.

Now, if you’ll excuse me, I need to go read some of Season 2!

That was an epic conclusion, especially Leo’s line to Wayne “we’re war buddies now” (or something along those lines) which was an amazing line for a number of reasons. First, because Wayne and Leo never really clicked at the beginning (although the antagonism seemed to be primarily one-sided), and second because Wayne had a bit of a complex due to never having been “baptized” by war which made him feel inferior to other bodyguards, especially Leo. That is why having the season end with Leo and Wayne joining forces and risking their lives to protect Rose felt especially powerful and meaningful due to this character dynamic. Not to mention Wayne swallowing his pride and begging Leo to train him (as opposed to early in the season where he stubbornly rejected Leo’s advice) was such a splendid character moment.

This season definitely had a lackluster beginning. I didn’t feel like Alfred was that compelling of a villain, and even if he had legitimate reasons for doing what he did, his motivations were never properly fleshed out thus making the character feel extremely one-note and evil for the sake of being evil. In other words, no complexity whatsoever.

In a way I can understand why Ryukishi went with this kind of villain for the first arc, a small fry antagonist. Alfred was the first obstacle for Leo and Primavera to overcome, and the arc served as a way for us to get familiar with the characters, grow to like them so the impact would be greater in the second arc. Needless to say, he definitely succeeded in that part.

The second arc of the season was way more compelling, with an antagonist I can actually get behind. A man visibly tormented by his past and the current state of affairs in Japan wishing to improve the lives his fellow countrymen. A man with a complex morality (unlike Alfred) who was first introduced as a friendly war buddy before his true identity was revealed (something I really like because it gave the readers a chance to warm up to Caleb before his eventual ascension). It was even more interesting how his goals aligned with Rose’s, but his way of going about it was completely different.

As far the main cast of characters is concerned, I don’t have any complaints. Rose and Wayne are definitely the two characters with most room for character growth. Characters such as Richard, Cyrus, Stella or Meryl are all quite likable and it is easy to root for them, and I’m interested in seeing where the story takes them in the second season.

Leo is an okay character. I occasionally get annoyed by the amount of scenes where he gets to say his cool line before eventually kicking some ass (it kinda loses its charm once it happens like a dozen of times). He did have some moments of depth however, so I’m hoping the next season could explore those a little more.

Most of all, however, I am excited for Rose’s development. Rose has to realize that it is impossible for her to protect people without dirtying her own hands, and judging from the scenes I’ve seen at the end of the first season, it would appear that Rose reaches that realization as well. It’s time for Rose to start kicking some ass instead of being a mere damsel in distress who can do nothing better but run and scream. At least give her a gun, Ryukishi!!

On the whole, the first season was a mixed bag. The first half was okay, but the second half was really good, and from what I hear, it only gets better. Onward to the second season!